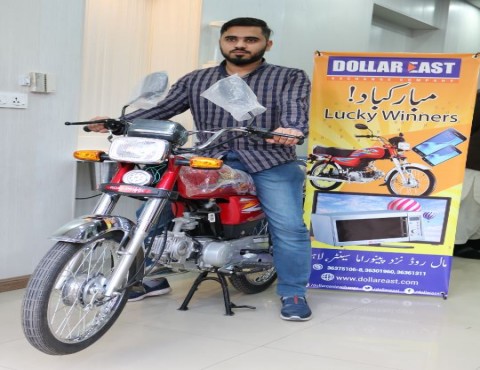 Lahore – 22 February 2020: Dollar East is delighted to announce the lucky winners of Mall Road Branch Campaign. The campaign started on 25 November 2019 and remained active till 31 January 2020. All the customers who availed the services of Currency Exchange, Home Remittance, Telegraphic Transfer and Demand Draft at Mall Road Branch Lahore, were included in the Lucky Draw.

Mr. Nadeem Mustafa spoke to the audience and expressed his gratitude for being the valuable customers of Dollar East. While talking to the winners he said that Dollar East is one of the pioneers in Exchange Business and has been playing a vital role in strengthening Pakistan’s economy. He mentioned that Dollar East introduced this campaign to promote the new location of Mall Road Branch, which has been recently relocated from Panorama Center to Main Mall Road. He thanked all customers for availing and trusting Dollar East services. He informed the audience that all winners were randomly selected through a computerized lucky draw. He also talked about the new on-going campaign and said that from time-to-time Dollar East will keep on bringing such gift campaigns for its valued customers.

The winners were offered refreshment and pictures were also taken while presenting gifts to them.  All the lucky winner were quite happy and thankful to Dollar East.