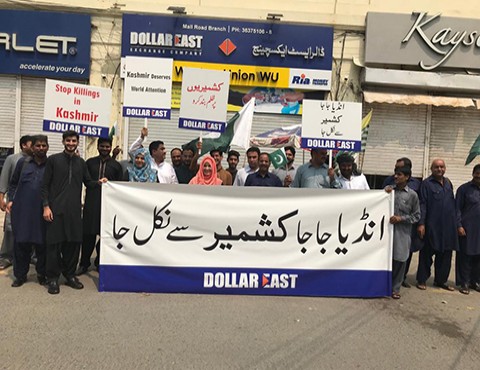 In line with the government’s decision to observe ‘Kashmir Hour’, Dollar East stood today to express the solidarity with Kashmiris. The Sirens were blown while National Anthems of Pakistan and Kashmir was also played during that time. Dollar East stood with the nation over deteriorating situation in Indian Occupied Kashmir (IOK).

The day was marked in the wake of recent human rights violation and atrocities by India in IOK. The Dollar East employees observed the ‘Kashmir Hour’ on Friday.  Senior Management also joined to send message of solidarity with Kashmir. Many other slogans along with “Kashmir banay ga Pakistan (Kashmir will be made a part of Pakistan)” were also raised in the day’s events. While talking to media, Dollar East officials said that we will fight for our Kashmiri brothers and will not tolerate the extremist behavior of India in Kashmir. Dollar East strongly condemns the brutality of India in Kashmir.

India continues to ramp up pressure on protesting Kashmiris. Pakistan’s Prime Minister Imran Khan, has decided to observe the Kashmir Hour in solidarity with the besieged people of the region. The IOK has been under a strict lockdown; enforced by the Indian’s government since August 5, when the region's sovereign prestige, Article 370, was revoked. The article allowed the state a certain amount of autonomy - its own constitution, a separate flag and freedom to make laws. Foreign affairs, defence and communications remained the preserve of the central government.

Dollar East has always stood with the national cause and supports the Government drive for Kashmir. As a Pakistani nation we have zero tolerance against violence, human rights violation and strictly condemns the revoke of article 370.