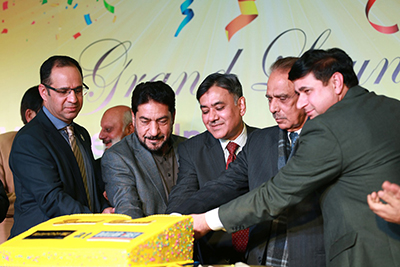 Dollar East has recently started Western Union payments at its branches. To celebrate the Western Union at Dollar East, A Grand Launch was held at famous 5-star Hotel in Lahore.

To celebrate the launch a special campaign has been offered. Theme of the campaign is “Every One is a Winner”.

Anyone, who receives Western Union Payment from Dollar East will win a guaranteed Cash Prize. To determine the cash prize, the receiver/winner will have to scratch the card provided by Dollar East. The amount on scratch card will be paid to the receiver without any delay through cash Counter. This Scheme will continue till 23rd March 2019.

Mr. Asad Iftikhar, Senior Country Manager – Western Union while expressing his views said that Dollar East has taken a very good start with Western Union payment services and we hope that the business and mutual relationship will improve in the days to come.

Chief Guest Mr.Moeen while addressing, congratulated Dollar East and Western Union to start the payment services at Dollar East. He said that we hope that it will increase the Home Remittances to Pakistan. He said that Pakistan is a very important market for Inward Remittances and there is a significant potential to increase Home Remittances from Formal Channels in which Western Union can play a vital role. At the closing of the ceremony a memorable cake cutting ceremony was held and shields were distributed to the distinguished guests.