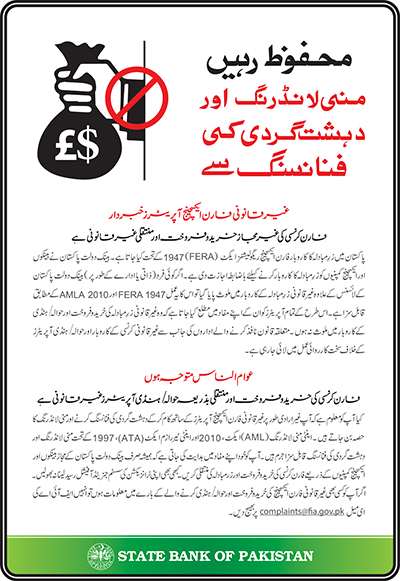 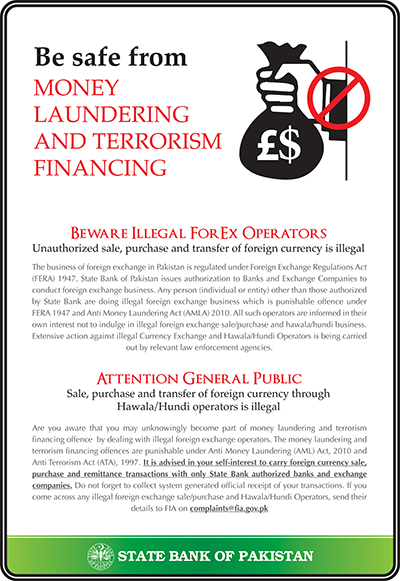 Anti-Money Laundering Policy Statement
The Company is strongly committed in preventing the use of its operations for money laundering or any such activity, which facilitate money laundering, or the funding of terrorist or criminal activities. Accordingly, the Company will comply with all applicable laws, and regulations designed to combat money laundering activity and terrorist financing, enacted by the Government of Pakistan, all International Laws to which the Government of Pakistan is a subscribe including the USA patriot Act and will cooperate with the appropriate authorities in efforts to prevent any misuse of the financial channels.

Every employee is required to act in furtherance of this policy statement to protect the Company from exploitation by money launders or terrorists.

Anti Money Laundering
Money Laundering is the process/act that disguises the illegal origin of the money. Money Laundering is the result of a large number of criminal acts to generate a profit for an individual or group that carries out the act. Now a days money laundering has turned into a major crime and the world has a serious concern towards it. Various measures have been taken to stop this unlawful act. Even in some countries, regulatory bodies have been formed to eliminate this crime. It is essential for us to know the effects which money laundering is creating on our economy specifically and our society in general as mostly under developed countries become the victim of this where the law enforcement agencies are unable to play their respective roles. That results in the following effects: